Bidding - a nil bid not worth the risk

We've seen a couple of "good" nil hands: a nil hand with Aces, and a nil hand with a void in a suit. Those are good nils because they are not likely to get set. Sometimes, people will bid a risky nil, though, leading to some unhappy discussions between partners when the nil is set.

What is a risky nil? In some cases, it can be hard to tell. One thing that increases the risk in bidding nil is when you are first to bid. At this stage, you do not know anything about the other players' hands. It can be an unpleasant surprise to bid nil and find that your partner has bid 1 - perhaps with a remark that they were planning on bidding nil, themselves (that would be "table talk", which can also upset some people)! They will now have to defend your nil with a very poor hand. This may not be a problem if your opponents have bid high - 6 and 4, for a total of 11 bid, for example. In this scenario, your opponents clearly have so many high cards that they may be forced to cover the nil. However, if the total bid at the table turns out to be 8, then you may very well be in for trouble.

Another thing that makes a nil risky is having a high spade card in your hand, especially if you do not have enough low spades to "duck" taking the trick if spades led.

Riskier bids are more justifiable at the end of the game, when perhaps you have nothing to lose by making them. They are not as defensible when there's no need for them. Some people enjoy defending risky nils, and some people really hate defending only but the most obvious nil hands. So, don't be surprised if you bid a risky nil and find that your partner doesn't help you. In my view, however, since Spades is a team game, you should always try to help your partner win their nil bid, no matter how crazy it is. Personally, I find it fun and challenging to defend a nil bid. However, sometimes it just doesn't work out.

Here is a replayer of an example where my partner bid a risky nil, and I was unable to make it work.

And here is a screenshot of the hands and bids, using the replayer: 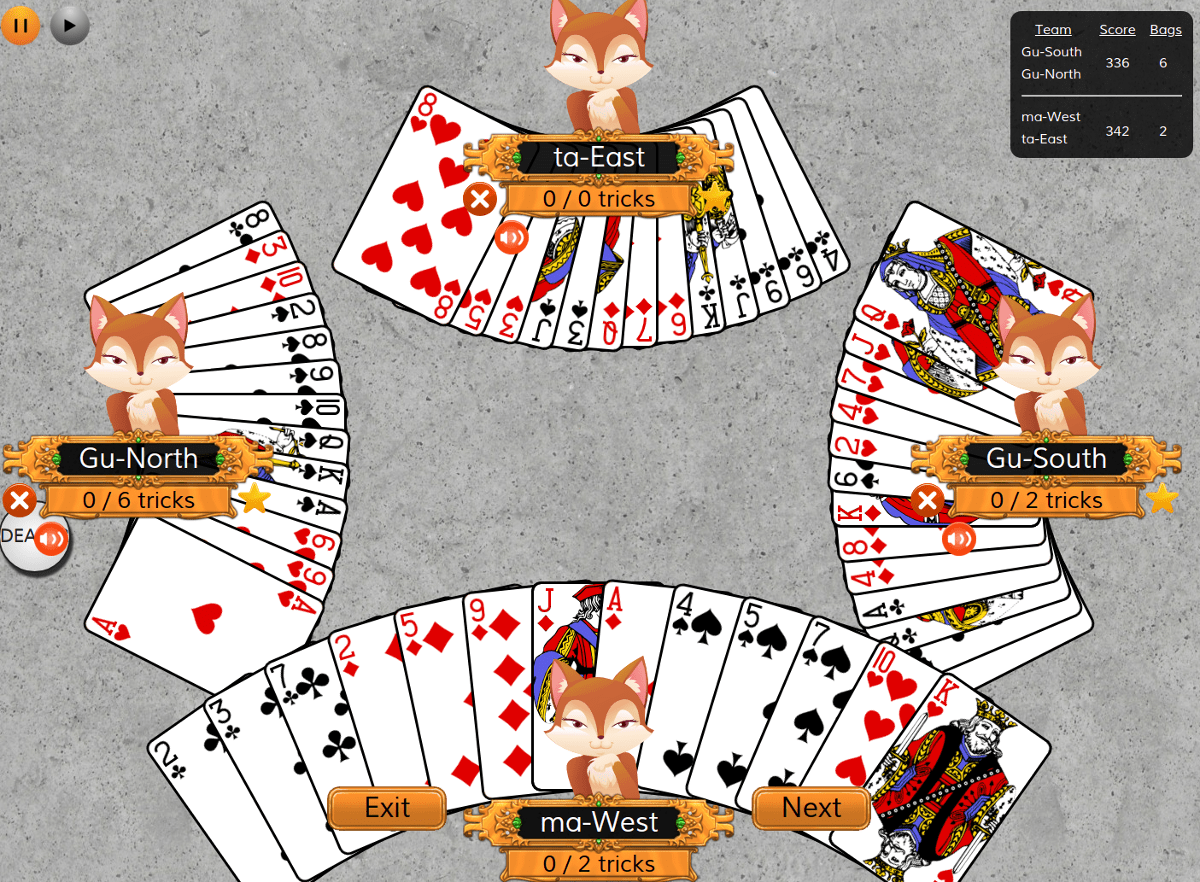 The nil is risky for the reasons described above. My partner bid first, not knowing whether I had a good hand. Also, while they only had two spades, one of them was high (the Jack). As you can see, I had 3 spades, but small ones. And I had a lot of small clubs. If this nil is to work, we'd need for the opponents to take most of the tricks with high cards! Fortunately, my left-hand opponent had bid 6. That indicates they have a lot of high cards and good (high) spades, so we would have to hope that player would unwillingly help in covering my partner's bid.

You can use the replayer link above to see how this hand worked out. I've also recorded the replayer and uploaded it to YouTube, if you'd prefer to watch it there:

You can learn a lot by watching this replayer. My left-hand opponent has some pretty good cards. My low bid shows that I have a weak hand. My opponents should read this to mean that I will probably not be able to take a trick if they lead with low cards. I think my right-hand opponent did not do a great job at attacking the nil. For example, they led with the Ace of clubs in the third trick, when it probably would have been better to lead with any of their multiple lower ranked cards.

Despite this somewhat poor attack on the nil, we still managed to get set. In this case, I don't think the nil was justifiable. It was risky, and there was no need for it: the scores were about even, mid-300s for each team, so the game was not near the end, yet. It was still fun. Some people will argue that there's never any reason to bid a nil like this. However, it definitely makes for an interesting game when your partner takes on some risks! And sometimes, it works.