It is usually safe to count the Aces in your hand for taking a trick, but sometimes you will not want to do so. In the picture below, I am planning to bid nil, despite the fact that I have two Aces in my hand. 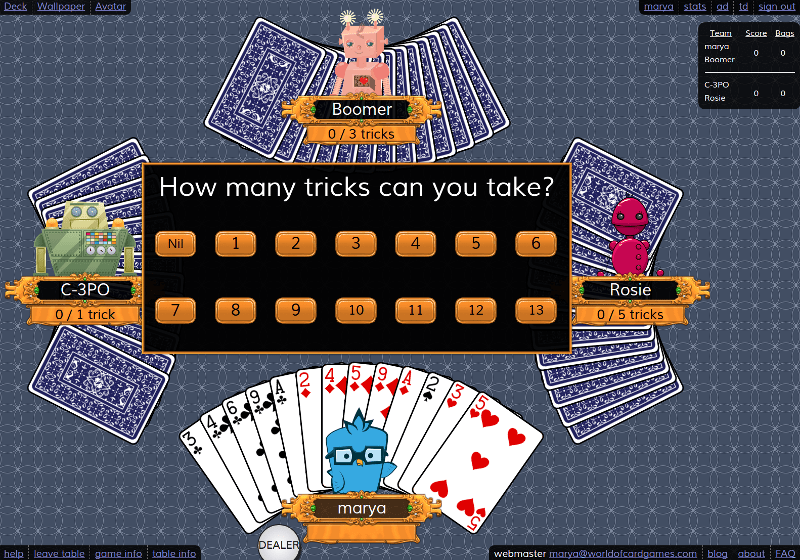 With 5 clubs and 5 diamonds, I'm "long" in the suits where I have Aces. Each suit will be led, on average, about 3 times during a hand (caveat: with unusual distributions of the cards, it could be more or less). Most of the high clubs and diamonds are held by other players, so the chances are good that I can keep "ducking" without ever being forced to play an Ace. I can discard my Aces once I'm void in another suit that is led. For example, the first two hearts tricks will pull the 3 and 5 of hearts from my hand, leaving me void in hearts. Then, I can discard an Ace on the 3rd hearts trick.

I'm "short" in spades and hearts, but that's okay. The two of spades is no danger, since it will be whisked away the first time that spades are led. My hearts cards are probably safe, too, since they are quite low.

As the dealer, I'm in a pretty good position. I know the bids of all other players, and my opponents did not have the advantage of knowing my bid when making theirs. This means that they bid without planning to set a nil. They may be too anxious to make their bid and not put enough effort into trying to set my nil bid.

You can replay this hand to see what happened in one particular situation. Notice how my opponents play low cards in an attempt to make me take a trick, while my partner plays higher cards to help me avoid that (this is called "covering").

Bidding nil is almost always a risk. In the picture below, I have the same, seemingly safe hand as shown above. But I got set on the very first trick because of an odd distribution of cards. My partner has no clubs to cover me (and cannot play a spade on the first trick), and West is void in clubs. I'm forced to take the trick! 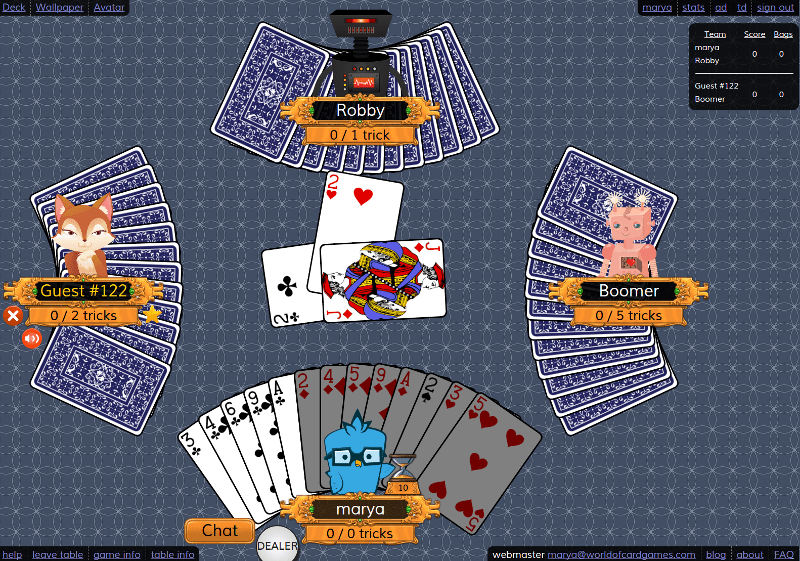 The nil bid is a powerful tool to help win the game since it awards your team with 100 points. However, you may go an entire game without getting a hand that is suitable for a nil bid. And if you fail in making a nil bid, your team loses 100 points!