What is the STD rule?

What does the term "STD" mean in Euchre? This is an abbreviation for "Stick the Dealer". To understand how it works, I'll explain how each Euchre hand starts. You can also watch this YouTube video to review how trump is chosen:

Suppose all the players pass on the up card. Now the trump suit is still undetermined! There's another round of choosing. The order of choosing is the same: left of dealer, followed by the dealer's partner, right of dealer, and finally the dealer is last. Each person gets to choose from any of the three remaining suits, excluding the "up card" suit. In our example above, the up card was the 9 of hearts. In this case, the remaining suits are clubs, spades, and diamonds. So everyone gets the opportunity to pick one of these three suits as trump.

But what happens if each player passes in this second round of choosing trump? The dealer is now presented with a choice: they must choose one of the three suits for trump! Here's where the "Stick the Dealer" rule gets its name. At this point, the dealer is "stuck" with the choice of naming trump. They have no choice! They must pick a trump suit. And it cannot be the suit of the up card - it must be one of the remaining suits.

This may sound pretty bad. The dealer may not have good cards which would help to name the trump suit. What if they have a handful of low cards - queens, nines, and tens? That's a valid hand in Euchre, and it can happen!

However, all is not lost. If the other players declined to name a trump suit, that's an indication that no one has a strong hand in any suit. It's advantageous to choose trump, if you can, so most players will do so if they think they can even win one point with their choice. It's entirely possible for the dealer's team to win the hand if the dealer got stuck naming the trump suit.

How to avoid STD

Some people don't like the STD rule! They don't like being stuck with a poor hand, and feel it's unfair to be forced to choose a trump suit in that situation. Their rules are more lenient. The dealer is allowed to pass instead of being forced to choose trump in the second round of choosing. In that case, all players just fold their cards, and a new hand begins.

There's a disadvantage to playing this way. The game usually takes longer to finish. And one of the nice things about Euchre is that games tend to be short - often less than 10 minutes long. It can also lead players to being extra picky about calling trump. If the dealer is not forced to choose, then why should their partner choose trump unless they have the perfect hand? My feeling is that without the STD rule, players are less inclined to take risks.

Some people like the STD rule. I do! Sometimes, it puts you in a bad spot with no good choices. However, that often works out okay. And everyone is equally likely to get stuck, once in a while, so it cannot be claimed that the rule is not fair. I also like a game where everyone takes a little more risk.

But that's just me! Maybe you prefer a more lenient game. By default, Euchre is played with the STD rule applied at World of Card Games. However, you do not have to play it that way. There is an Option that can be used to play at tables without the STD rule. To use this Option, click the Options button for Euchre, shown in the screenshot below:

When you click that button, your Options panel pops up. You'll see a variety of Options there, including one near the bottom that says "Stick the Dealer". If you do not want to sit at tables using the STD rule, click the "No" radio button next to "Stick the Dealer", and then hit the "OK" button. 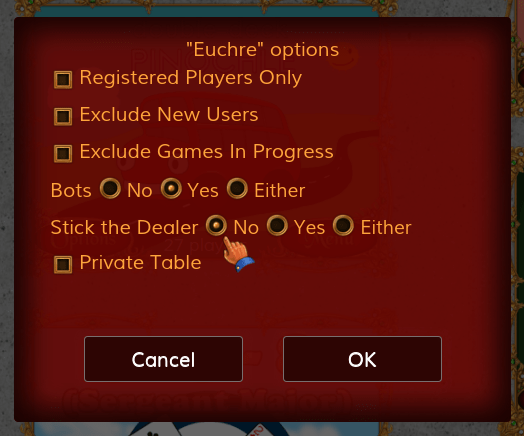 After setting this Option, clicking the Euchre game panel will result in being seated only at tables where the STD rule does not apply.

Note that you will still see STD tables in the "list of tables". You have to be more careful when clicking on tables, there! 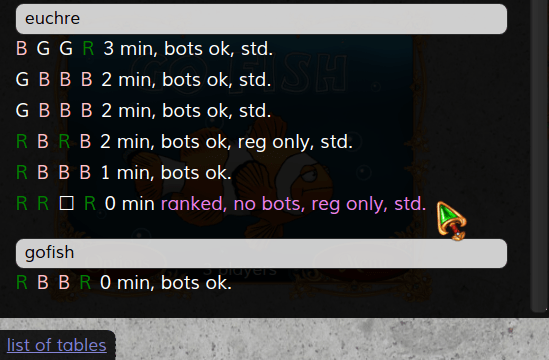 You can try out the different Options by going to play Euchre at World of Card Games. Let me know what you prefer!