When should the dealer call the up card?

Should you call the up card in Euchre?

The Euchre bots at World of Card Games were originally programmed to be pretty cautious in their tactics. In Euchre, if you are very conservative and rarely call trump, you probably won't get euchred. However, you also won't make as many points as you could. An opposing team that is willing to take more risks will gain more points over you in the long term, and wind up winning more games. Sometimes, it's hard to know what is the right amount of risk to take.

Up until recently, the dealer bot would not order the up card if they didn't have a hand that was strong in that suit. For example, suppose the up card was 9 of clubs, and the dealer had the 10 of clubs and the king of clubs, and the other players had all passed. Then the bot would not order the up card, even when it would have resulted in them having 3 trump. Their cautious programming said that these trump cards were too weak, and they might get euchred.

I asked the experts at Ohio Euchre about this, and got some great comments about when the dealer should order the up card. I've reprogrammed the bots so that they always "order up" if doing so will result in them having 3 trump cards.

Here's an example of how it works. In the screenshot, I have two low spades, the 9 and the queen, and the up card is also a low spade. Should I call up? 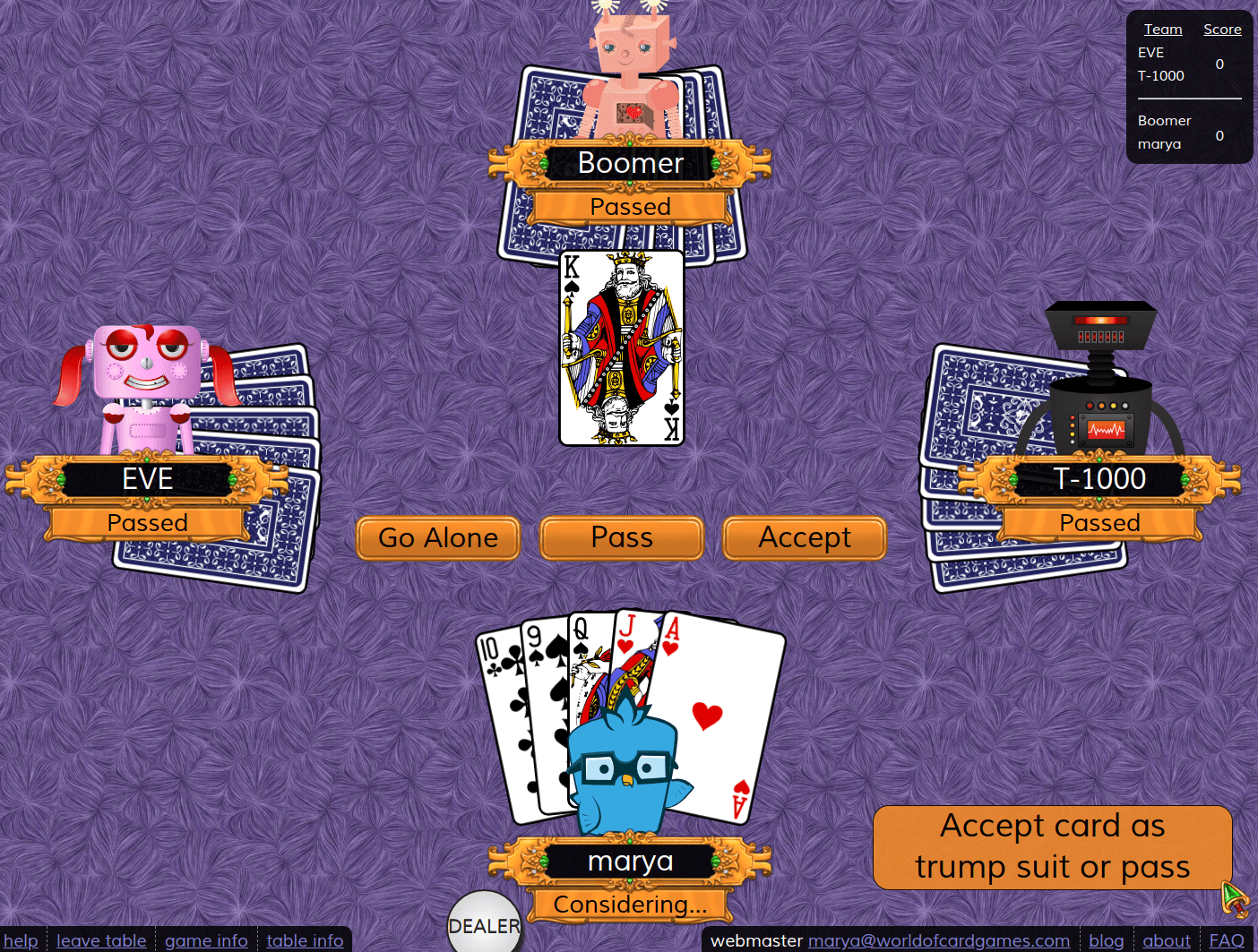 Here is the replayer for this example. Will it work to order up? Well, run the replayer and you will see that our team took 3 tricks, and we didn't get euchred - despite the fact that my first seat opponent had both the left and right bower! I set the deck up the same way and played the hand slightly differently, and my team still won a point. This is just one example which shows you how well the tactic works in concrete terms.

Aside from getting expert opinions, I also ran an experiment. I had the bots play 10,000 Euchre hands with the old programming, and 10,000 hands with the new programming. The deck was shuffled randomly in the first case, and then the same decks were reused for the second case. So in each case, the bots should (and did) play exactly the same way except for the case when the new programming made the dealer more aggressive in ordering the up card.

Of the 10,000 hands, the scores differed in 1,178 of them. So the new strategy made a difference in about 12% of the hands played. The points given to the dealer's team and to the opponents' team in all 1,178 hands were collected before, and after, the new programming was applied. Here is a summary of the results:

Of course, people are not bots. You may not see quite the same results if you apply this tactic yourself. If your opponents have 3 trump, including both bowers, but do not order up in this situation, then you may be euchred if you order up. I'd argue that if your opponents do not order up in this situation, they are probably going to lose more often than not, though.

Does this new tactic matter? Absolutely! If you can apply a tactic that has you winning 10% more hands than you did previously, you will win more games on average. I hope this page convinces you to order up when you'll get 3 trump as the dealer, if you have not been doing so already. There are rare scenarios where it might give you an edge to turn down the up card, and you can read the discussion at Ohio Euchre to learn more about that. But this current tactic is a good one for the casual player (and for bots!).