"Reverse Next" Strategy (AKA "Crossing the Suit")

Explanation of "Reverse Next" Strategy

In Euchre, you are usually better off when you call trump. The problem is that you don't always know whether it's a good idea to call trump! So it pays to have as many strategies under your belt that help you call. "Reverse next" is one of those (see Note [i] for more information on the terminology). The reverse next strategy advises the dealer's partner to call trump, under particular circumstances, in the second round of choosing. Since trump is chosen prior to the dealer's turn in the second round in about 85% of hands, this strategy is not going to apply very often. The additional requirement of specific constraints in order to use it makes it even more rarely applicable. However, if it produces winning results, it is good to know about.

You will find explanations of "reverse next" at Ohio Euchre and Vegas Euchre. Here is a summary. The "set-up" for reverse next looks like this:

In this specific situation, the constraints to call reverse next are as follows:

The logic behind this choice is that since the dealer did not choose the up card, their hand is probably stronger in a suit of the opposite color. Also, since dealer's left-hand opponent did not call "next", they probably don't have a good hand in any suit.

I admit that when I first read about this strategy, it sounded pretty crazy to me! I thought about all the exceptions to these scenarios. Suppose an opponent held both bowers in the opposite suit but was afraid to call because the remainder of their cards were non-trump nines? Of course, in this scenario, they "should" call and assume their partner will take one trick, but some players are more timid and won't call in this case. Or, suppose third chair (the dealer's right-hand opponent) holds a massively good set of cards in the opposite suit, for example the ace and both bowers?

Experimenting with the Bots

So I was skeptical. Since I have the Euchre "bot" code, I decided to run a large number of simulations of Euchre hands and check to see if bots who implemented a "reverse next" strategy won more hands than bots who did not.

I implemented the bot strategy as I've described it above. The requirements were that the bot's partner was the dealer, and the up card was an ace or jack, but it had been turned down. In addition, the bot's regular strategy was checked first: did the dealer's partner have a strong hand in another suit, for example? If the bot's usual strategy was to pass, only then was "reverse next" checked: the bot had to have at least a nine and king in a suit of the opposite color of the up card. If that was the case, the bot made a "reverse next" call. The requirements were not as stringent as suggested by Vegas Euchre - the bot did not have to have an ace or be void in a suit.

I ran 26,754 simulations with bots playing a single hand of Euchre, the deck shuffled randomly, and recorded the deck and dealer for each simulation. I also recorded whether or not "reverse next" was used for each of these hands, and which team won the hand. The bots didn't play an entire game, just a single hand, because I wanted to hone in on how "reverse next" effects an individual hand.

Next, I took only the hands where "reverse next" was called in those simulations, and re-ran them using the bot code again, only this time, the "reverse next" strategy was never applied. Again, I recorded which team won the hand.

If "reverse next" strategy works, you'd expect that the bots who use that strategy will more frequently win the hands in which it can be applied. And indeed, that is what happened. Here is a summary of the stats.

In only 884 of the 26,754 hands was "reverse next" applicable. Apparently, it's really pretty rare that you'll even be able to use this strategy - about once in every 30 hands or so!

My conclusion is that the reverse next strategy does, indeed, work, and that it's worth using whenever the conditions for using it can be applied. Some people only use it at the beginning of a game, when the scores are low and the consequences are less severe if it goes wrong. Personally, I would use it even towards the end of the game, since it tends to work out in the dealer's favor, on average.

Example with King and Nine

Here's a replayer where the "reverse next" strategy worked for me. My partner, the dealer, turned down the jack of diamonds. I have just two clubs - the king and the nine! But I called clubs as trump, even though it looked pretty sketchy, because I had faith in "reverse next". I did have an off-suit ace, and that helped. My team managed to win the hand, even though my partner wasn't able to take a trick. 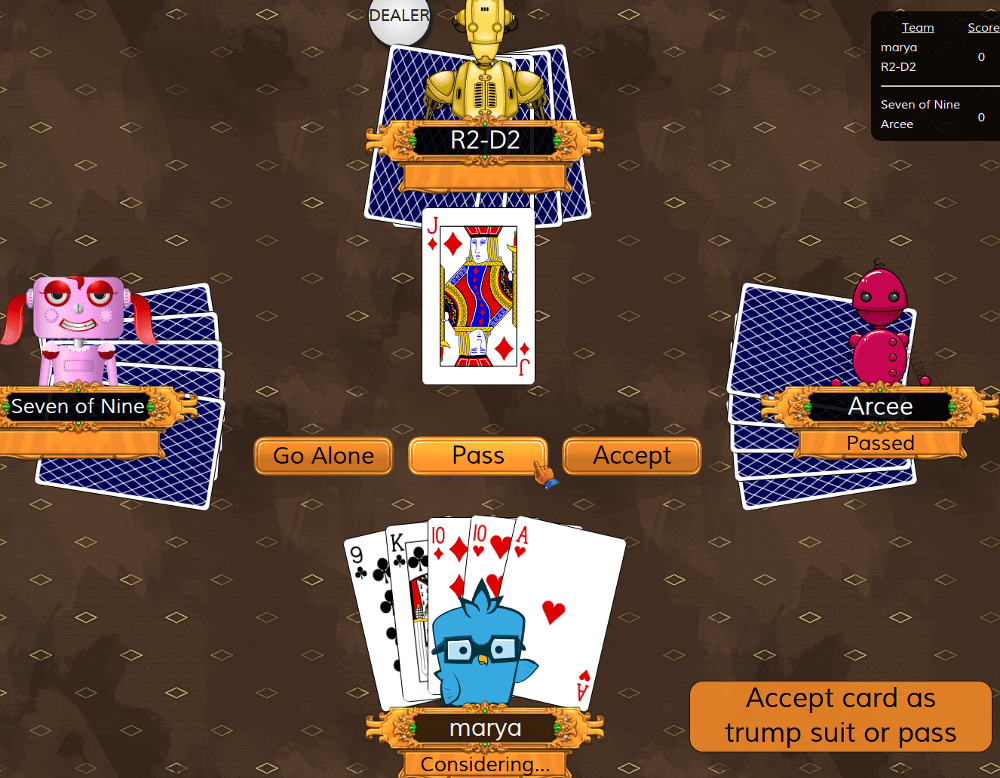 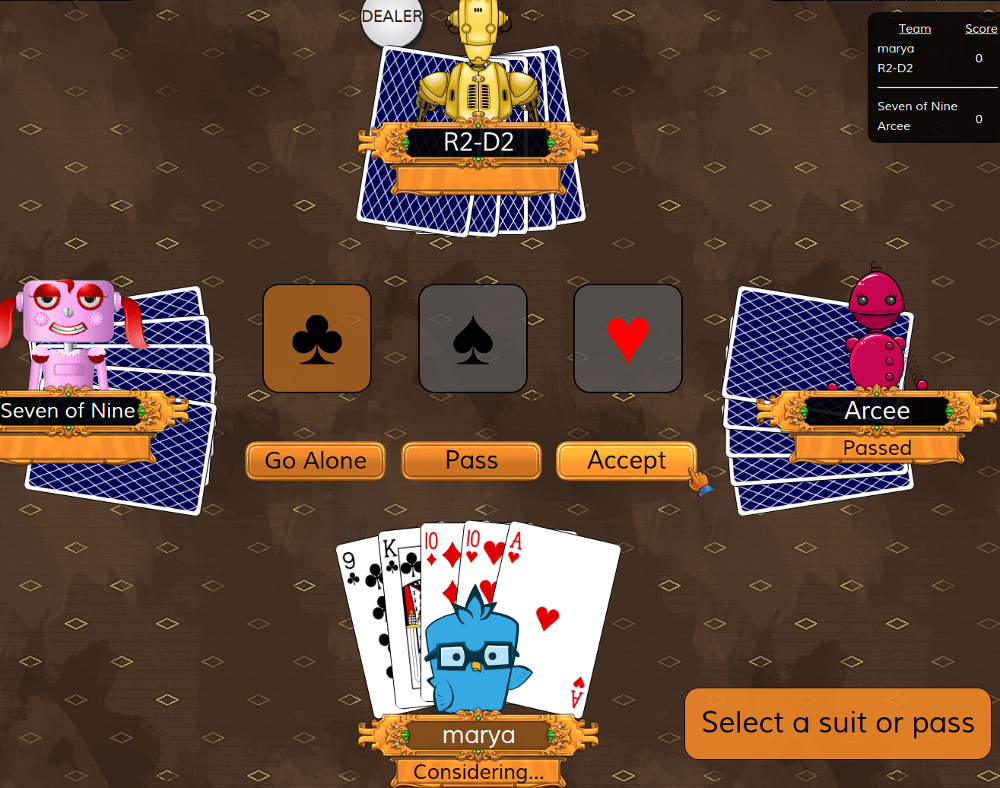 Example of Reverse Next Preventing a Loner

To play the devil's advocate, here's a replayer where the "reverse next" strategy failed me. My partner, the dealer, turned down the ace of spades. I have the king and nine of hearts, and decide to call hearts, even though my hand seems very weak. Well, it turns out that my hand really was weak compared to the cards in third chair's hand. This is one of those cases that I was worried about when I first heard about the reverse next strategy - what if I call trump in a weak suit, and my left-hand opponent is strong in that suit?

Well, think about it this way. If you look closely at my left-hand opponent's cards, you'll see that the bot might very well have gone alone with those cards - and a loner would have been successful. So you could say that we actually prevented a loner by calling - we only lost 1 point, whereas we might have been behind by 4 points if I hadn't called hearts as trump. This example shows how reverse next might work in your favor, even when it seems like it failed, at first glance. I've posted a screenshot of the replayer, below, so you can see how all our hands looked. 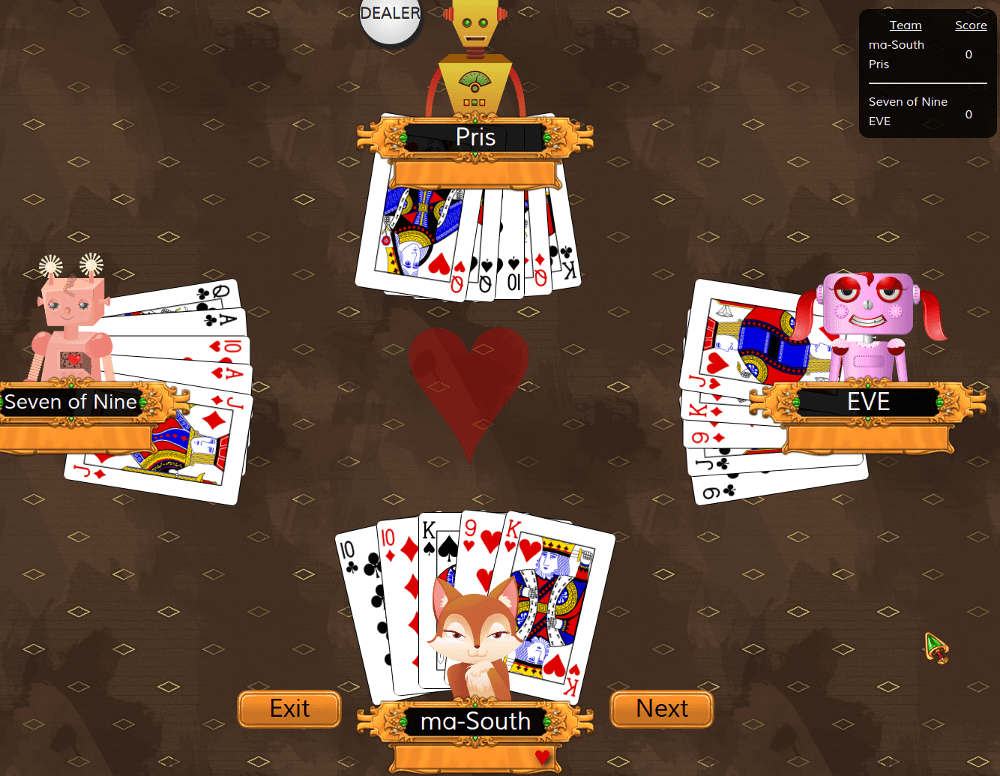