If possible, discard to go void in a suit

Discard to go void in in Euchre

When playing Euchre, there are a couple of cases where you have a choice as to which card you will discard. The most obvious case is when you are the dealer, and someone orders the "up card" into your hand. In that case, you can discard any other card in your hand. The second case happens when cards are being played. If the person leading the trick plays a card of a particular suit, and you do not have any cards in that suit - you are "void" in that suit - then the rules say you can play any card in your hand.

So, when given the choice, how do you decide which card to discard? Should you just throw away your lowest card? Sometimes that can make sense. However, there's a better strategy. It is generally true that you should try to discard a card so as to create a void in a suit, if that is possible.

Here's a replay of a Euchre hand that gives an example of how going void works. You can also watch how it works in the YouTube video below.

In this example, I am the dealer's partner. The up card is the king of hearts. The person left of the dealer (aka "third chair") orders it up! If you view the replayer, you will see that their hand is fairly strong - they have two high trump cards: the ace and the left bower. I can see how it is tempting to order up.

Since my partner is the dealer, they get the up card, and they must discard a card. Wisely, they throw away their low card, the nine of spades. It's an obvious choice to discard, because it's a very low card, and unlikely to take a trick! But more importantly, by tossing this spade, they are now void in spades. That means they can trump a trick that is led with a spade.

If you follow along with the replayer, you will see that my opponent to my right has a pretty bad hand. They are first to play a card, and decide to lead with spades. I'm lucky in having the ace of spades, and my left hand opponent cannot trump my card because they happen to have a spade as well. Now my partner is last to play a card. They do not have to follow suit because they have no spades. They have two trumps: the nine and king of hearts. They also have the king of diamonds, and two club cards. What should they discard? It would make the most sense to discard the king of diamonds. That would make them void in diamonds, so they can possibly trump a diamond trick.

As you can see, the dealer unwisely chose to discard their low club card, a queen. So they are not void in diamonds, and they will not be able to trump a diamond trick, if the opportunity arises. 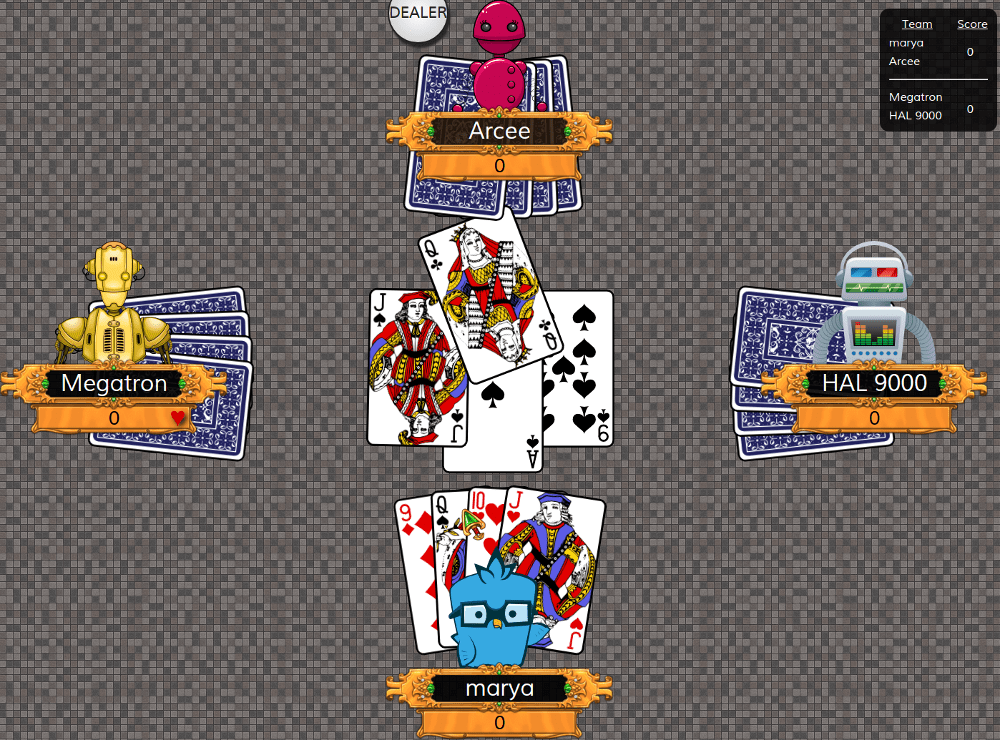 And indeed, it turns out that every player has a diamond card. So when a diamond card is played, the ace of diamonds in our opponent's hand takes that trick.

If you keep following along with the replayer, you will see that we euchred our opponents, despite this tactical mistake on the part of my teammate! We had some luck: we both had two trump cards, and I had the strongest one, the right bower (jack of hearts). In addition, one of our opponents had a pretty bad hand, with no aces and no trump cards.

It definitely takes some luck to win consistently at Euchre! However, sometimes, you can "make your own luck" by using a good strategy. Remember to "go for the void" when you have the opportunity to discard a card.