Defending against a loner - Part I

At the start of each Euchre hand, every player is given a turn to name the trump suit. During this turn, in addition, the player can also decide to "go alone". That means that their partner will sit out the hand! If they "go alone" and take every single trick - all five - then they will get four points instead of the usual one or two. That can be enough to win the game, and it's the reason that so many players will try for it, even when it's not a sure thing.

If your hand is a "laydown loner", that means you hold all the highest trump cards: both bowers, the ace, king, and queen of trump. It's unusual to get such a nice hand! In that case, no matter what cards are played by the opponents, you will win every trick.

It's more common to have a hand which has the potential of being a loner, if luck is on your side. And this is the type of loner that you'll more frequently find yourself defending against when playing Euchre.

One defense strategy: Leading with a long suit

With the right mix of luck and strategy, you can sometimes defeat a loner. But you have to be careful! Here's a replayer example where the loner could have been defeated, if only the correct tactic had been used.

If you'd prefer, you can view the replay of the hand using the YouTube video, below.

Let's take a look to see what went wrong.

Third chair calls Hearts as trump! Not only that, they "go alone". Their partner is out of the game. Without their partner playing, I am the first person to play a card.

There are a couple of things to keep in mind, here. First, my team should not give up hope, assume the loner will work, and mindlessly play any card. True, our defense may be hopeless. But if we give up hope and don't think about our strategy, we will only have luck on our side. Let's hope for luck, and play with skill.

With that in mind, now I have a choice. What card should I lead with? I have a single hearts card, a single spade, and three diamonds.

If you follow along with the replayer or the video, you will see that I played the king of spades. However, it would have been better to lead with a diamond card. This is my "long" suit - meaning I have several cards in the suit. Why does this matter? Recall that there are six cards of each suit in a Euchre deck: the 9, 10, jack, queen, king, and ace. Three of those diamond cards are in my hand, and three diamonds are somewhere else - possibly in other players' hands, maybe in the hand of the player who's sitting out the hand, maybe still in the deck. Further, one of those diamond cards is actually counted as a heart: the left bower, the jack of diamonds. So in reality there are only two more remaining diamond cards not in my hand.

If I play a diamond, everyone has to follow suit if they have a diamond. Of all the suits I could choose from, it's most likely that the dealer or my partner are void in diamonds. That's just because I have several in my hand, and there are fewer to go around.

If I play a card from my long suit, I am hoping that my partner is void in that suit, and that they have a trump card. This opens up a couple of different scenarios where we can spoil the loner!

In the first scenario, the dealer has a diamond card, and must follow suit, whereas my partner is void in diamonds, so they can trump that trick, spoiling the loner. That would be ideal!

In the second scenario, both the dealer and my partner are void in diamonds. Then the dealer might play a low trump card, which can be over-trumped by my partner. 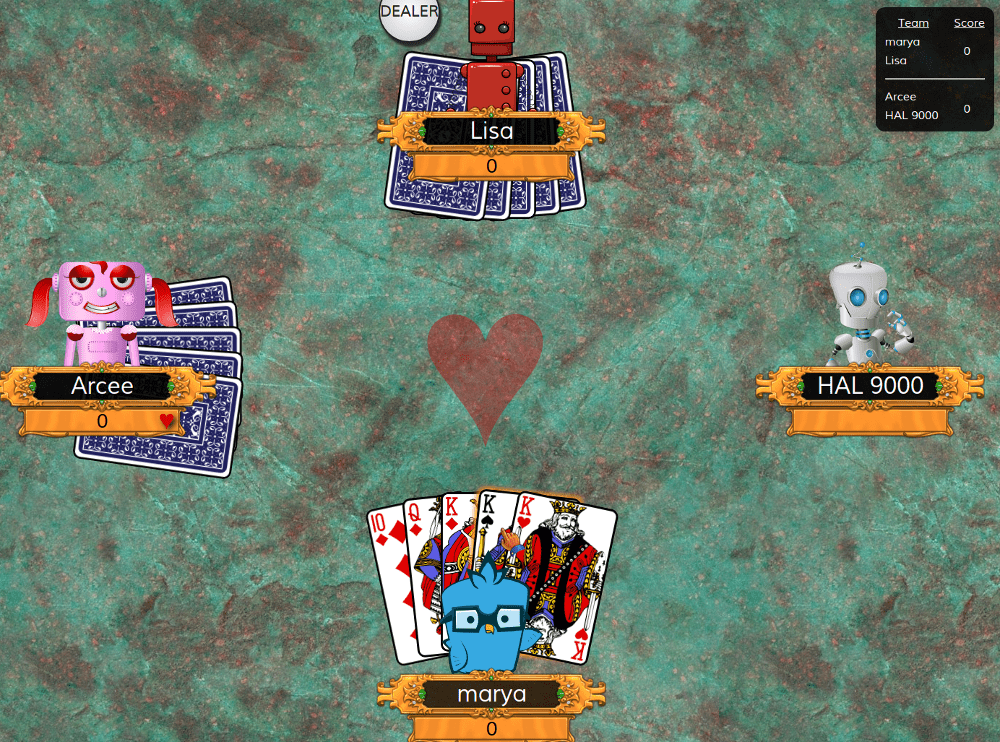 There's even one more scenario! Suppose both the dealer and my partner are void in diamonds. The dealer tries to be clever and prevent an over-trump by playing a bower to trump my trick. Well, my partner cannot take the trick anymore - the dealer foiled their chances! You may think we are lost. But in fact, my partner has two trump cards: the queen and the ace. If the dealer leads the next hand with another bower, then my partner will wisely follow with the queen, and hold onto the ace. Then they will still spoil the loner.

As you can see, there are sometimes ways to stop a loner. The next time your opponent goes alone, and you are first to lead, think about what you can possibly do to help your partner take a trick. That is one way to defend against loners.