I've gathered some Euchre statistics about the "consider" phase from a large number of hands played at World of Card Games. Before showing these stats, let's review how the "consider" phase works in a hand of Euchre. You can scroll down to the next section if you do not need a reminder.

At the start of each hand, each player is dealt five cards. Then, the top card from the deck is turned up for everyone to see, and the first round of choosing begins. The player to the left of the dealer is given the choice to declare the trump suit by "ordering" the up card. If they "order up", then 1) the trump suit becomes the suit of the up card, and 2) the up card is given to the dealer, who must discard another card in their hand.

The first column looks at statistics from "solo" tables. These are private tables with table name "none"; only one human is ever allowed at that table - the player who started it. This type of table will have results that are slanted towards the way that the bots are programmed.

The second column looks at statistics from all other tables, where multiple humans are allowed, and bots may or may not be allowed. I didn't break down the stats to see who was actually making the decision - a human or a bot. But the stats are clearly slightly different because humans play a little differently from bots.

In case you are not familiar with the terminology in the first column, let me explain that "first chair" is a synonym for "left of dealer". This person is called "first chair" because they are the first person to be given a choice, and the first person to play a card. The "second chair" is the dealer's partner and is the second person to be given choice of trump. The "third chair" is to the left of "second chair". The dealer is just the dealer (not usually called "fourth chair"). This is shown in the picture below; dealer is west, first chair is left of the dealer (north), and so on. 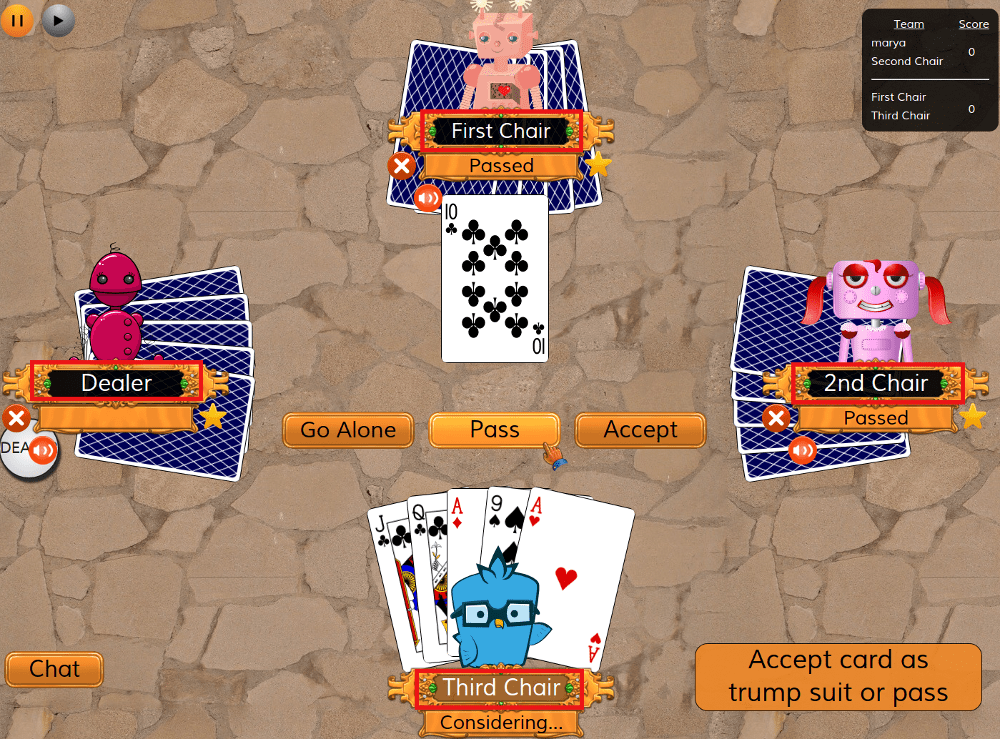 During the second round of choosing, when the up card has been turned face down, first chair called trump in almost 20% of the hands. I'm not sure why that happens, but I wonder if it has something to do with the "next strategy". There's a discussion thread entitled Almost Always Calling Seat 1 (Round 2) at Ohio Euchre which goes into some detail about some other possible reasons for this.

Notice that it is unusual for first and third chair to order the up card into the dealer's hand. This makes sense to me. The dealer is their opponent, and ordering up gives aid and comfort (and trump) to the enemy! You'd have to have a very strong hand of trump for this to make sense.

Also notice that it is fairly unusual for third chair or the dealer to call trump in the second round of choosing. I think the explanation for that is simple. The fact is, in most hands, someone else calls trump before the choice even gets to these players. Adding up the percents in column two, prior to "3rd chair, 3 suits", we have 5% + 17% + 5% + 30% + 18% + 11% = 86%. So in 86% of the hands, trump has been called before the choice gets to those players in round two. If you're third chair, or the dealer, and have a fairly strong hand of a suit that's different from the up card, you will likely never get the chance to call. It's often the case that you don't get a chance to call with a strong hand in Euchre - someone else will beat you to it! This is why I call Euchre a game of frustration! :)

If you enjoyed reading this page, you may want to continue reading part II, which has a more detailed analysis of the "consider" stats..