When to call a Loner in Euchre?

What is a "Laydown Loner"?

During the "choosing" part of a Euchre hand, a player can decide the trump suit. In addition, they can decide that they want to "go alone". This means that their partner sits out the hand, and the player tries to take all the tricks on their own.

At first glance, that seems crazy. Euchre is a team game, and many tactics rely on team play. Why go it alone when you don't have to?

The reason is that a successful loner garners you four points, whereas you can normally only win one or two points per hand. This many points can make the difference between winning or losing! In contrast, your team is rewarded just one point if you only take three or four tricks when going alone - but that's the same number of points for taking three or four tricks, whether or not you go alone. Because of the high reward, many people will take the risk of a failed loner. Usually, the worst that can happen is that your team only wins one point for that hand. However, sometimes a risky loner will lead to the loss of two points. This is something you want to avoid!

It's very rare to get a loner that is completely assured of winning. This type of hand is called a "laydown loner", and it looks like this: 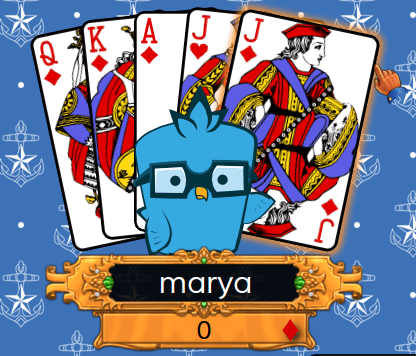 This loner has all the highest cards of the trump suit, including the left and right bowers (both red jacks). No matter what card the opponents play, or who is leading the first trick, every trick will be taken by a player holding this hand.

When should you risk a Loner?

Let's take a look at this hand: 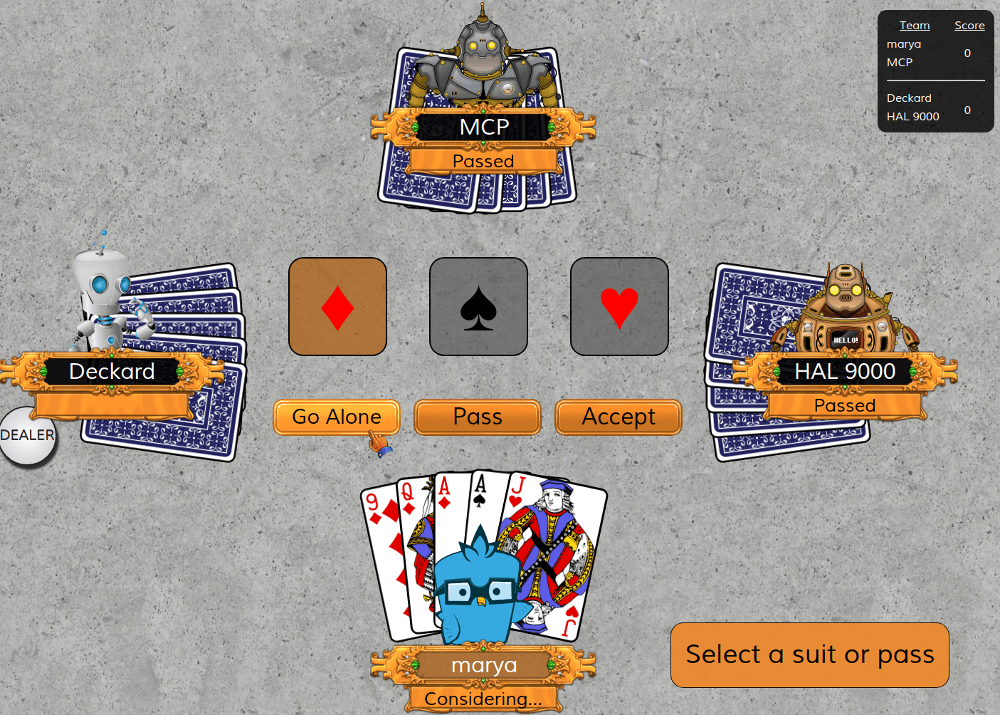 I had an off-suit ace (the spade), and a handful of diamonds (the jack of hearts counts as a diamond if diamonds are trump). Importantly, I didn't have the jack of diamonds (right bower)! Without that, I was not sure to win all the tricks. However, it was just too tempting, so I called a loner.

This replayer shows how my loner went. If you prefer, you can view how the hand played out in the YouTube video below, but the replayer will show you all the cards in everyone's hands.

It turned out that the right bower was in my partner's hand, something you can see if you use the replayer above. This is how I won. At the worst, I might have only won a single point.

If you view the replayer, you will see that my loner might have been foiled if the opponent to my right had led with a club. I might have trumped with my 9 of diamonds, and been over-trumped by the 10 of diamonds in my left-hand opponent's hand. So my right-hand opponent would probably have been wiser to lead the trick with a long suit (clubs, here), which sometimes works to stop a loner.

Playing as a team in Euchre

You are going to find disagreement about when it is worth going alone. Some people think it is rude to go alone with any but the best of hands. Since Euchre is a team game, they think that by going alone, you are throwing away the chance to win two points with the help of your teammate.

Other people are at the other end of the risk spectrum, and will call even risky loners that might get them set, losing two points.

I think most people recognize the value of a pretty good hand, and will be happy if their partner goes alone when the situation calls for it. I also think that one of the most important factors in playing Euchre is that the two teammates agree on strategy. Otherwise, it's not much fun. Teammates will start to bicker over whether this or that hand was a suitable loner, and the partnership will become acrimonious. Hopefully, everyone understands that both partners are trying to win the game, and doing it according to their best judgement!