I first started playing Double Deck Pinochle when I began implementing it for World of Card Games, about 6 months ago. So I have not been playing long. This page is a beginner's perspective.

Similarities to Other Card Games

Pinochle contains some elements from several other card games at World of Card Games.

My initial impression of Pinochle was heavily colored by playing a lot of Spades, a game which has only a few restrictions on what cards can be played when "following" a lead card.

In Spades, you must follow the lead card suit when playing a card, but only if you have a card of that suit. Otherwise you are free to play anything. In Pinochle, the rules are more rigid: you must always play a higher card of the suit that led the trick. And if you cannot do that, you must play a trump suit card, if you have one. This is called "crawling". Here's a picture showing the difference: 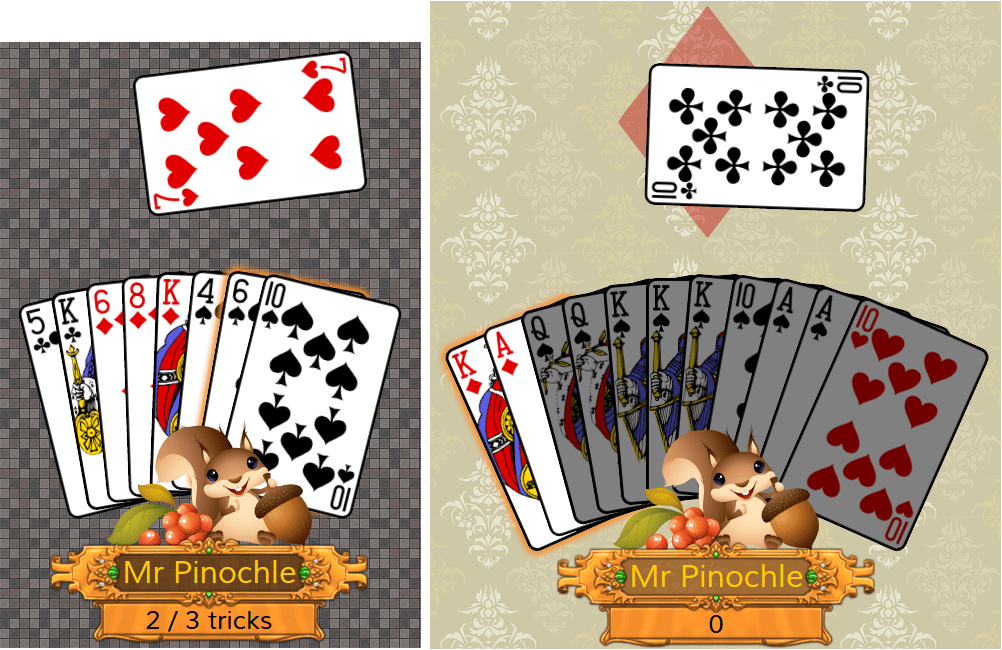 In the screenshots above, the player on the left is playing a game of Spades. Since he has no Hearts cards, he can follow with any other card. The player on the right is playing Pinochle. He has no Clubs cards, so he cannot follow the trick suit. Therefore, he must play a Diamond (trump) card.

For someone used to Spades, being more restricted in your choice of cards can be frustrating. Just remember that everyone is equally affected by the rules, though.

Signalling with your Bid

"Table talk" is considered questionable in most other games. However, in Pinochle, it is perfectly acceptable to use your bid to signal information about the "meld" in your hand to your partner. The more information you have about your partner's hand, the better prepared you are to make your own bid.

As a very simple example, suppose you have two Pinochles in your hand. A Pinochle is a "meld" made up of a Queen of Spades and Jack of Diamonds. Two Pinochle melds are worth 30 points, not bad! Wouldn't it be nice if you could just tell your partner "I've got 2 Pinochles"? Suppose they had 30 meld points in their hand too... They could make a bid of 60 and feel comfortable knowing that between the two of you, you have enough meld to fulfill your bid.

You cannot tell your partner verbally how many meld points you have, but you can signal it by choosing your bid carefully. In this case, you will want to bid 3 extra points over the previous player's bid - the 3 extra points means "I have 30 meld points".

Pinochle experts will have worked out a very precise bidding system with their partners over the course of time. I recommend the bidding system described at Pagat's Double Deck Pinochle page for you to start with. It is relatively simple, and follows the example give above.

Think before providing a "meld bid", however. If your partner has already passed (declined to bid), then there is no point in sharing any information about your meld points with the table. You are on your own in figuring out what to bid. Your partner may have no meld points at all, or just a few points. Also, if you have no Marriage melds, it is probably unwise to bid at all. In that case, if you win the bid, you will be unable to choose a trump. The rule is that you can only choose trump from a suit in which you have Marriage melds. So your team would get your bid subtracted from your score, an unpleasant penalty.

When I first began playing Pinochle, I was overwhelmed by all the different types of meld, and the rules for when my cards could "overlap" to belong to several different melds, and when they could not.

Here's an example of cards belonging to more than one meld: 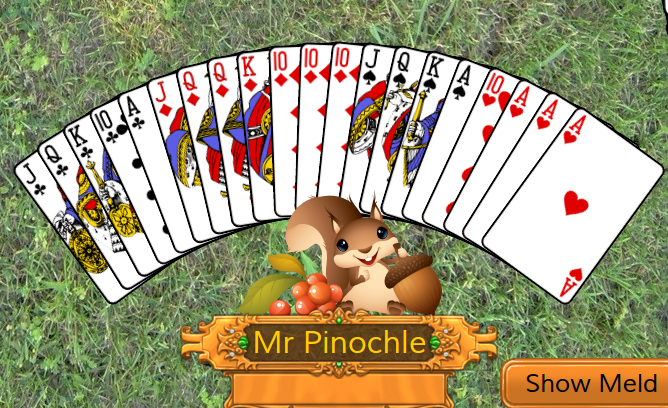 If you look carefully, you will see that the hand contains a "Run" in Clubs: A, 10, K, Q, J. Note: you will only get meld points for this Run if Clubs is the trump suit!

You might also think that if Clubs is trump, you could get a Royal Marriage from the Q and K of Clubs. But that is not the case: Marriages and Runs are both "Type I" melds, and the same card cannot be applied to two different melds of the same type!

If you are like me, you will find it a bit hard to find and keep track of all the different melds in your hand, especially in the beginning. Fortunately, there's a "Show Meld" button that you can click during the bidding phase that will help:

At this point, you may be wondering what to bid for the above hand of cards. Well, it depends. If my partner were the dealer and no one else had bid yet, I'd probably place a 50 bid, the lowest. This would save my partner from being forced to choose trump with poor cards, or even having to forfeit if they had no Marriages. Otherwise, I would probably pass. The hand has a total of 10 meld points, or 25 if I assume that Clubs is trump (15 points for the Run). If Clubs are chosen for trump, though, my hand would not be strong in trump. It seems like a risky hand for bidding, although it might work (remember I'm no expert!).

If someone else had already bid, I would probably pass. I have 10 meld in my hand that do not depend on the trump suit. If I bid 1 more than the previous player, it does not indicate 10 meld - it indicates a desire to call the trump suit. I would probably not want to do this. And I can't bid 2 to signal my partner that I have 20 meld, since I only have 10 meld. I can't count the 15 meld from the Run because I do not know if my partner is planning on calling Clubs as trump. When signalling your meld points to your partner, you should not include points due to Runs or Royal Marriages!

I'd love to hear from long-time Pinochle players about how they'd bid this hand!

Bidding well is a crucial skill in Double Deck Pinochle... It is so important that it is used to decide the winner in certain cases when the score is not sufficient to do so.

This is where the "Bidder Out" rule is applied. If both teams reach 500 points or more in the same hand, then the victory is given to the team who declared trump. This is not necessarily the same as the team who got the highest score! If this happens when you are playing a game of Pinochle at World of Card Games, you will see a brief explanation at the "Game Over" page which reads "Bidder out rule awards win to high-bidding team when both teams score over 499".

For those who are unfamiliar with Pinochle, the rule may seem bizarre; in most games, the high score decides the game. I'm not making this up, though! I have asked around about this issue, and everyone seems to be in agreement about it. You can read the discussions here:

Pinochle is played with the "Bidder Out" rule turned on by default at World of Card Games. However, the option can be unchecked to play with the rule that the high score always wins.