The Goal of Hearts is to Win!

When I first started playing the card game Hearts, I had one very rudimentary strategy: if I had the Queen of Spades, I'd dump it as soon as possible!

I believed that Hearts is not a team game.

I was wrong on all counts. There is just 1 winner in Hearts: the player who has the lowest number of points at the end of the game. Your goal is to be that person. As an aside: With 4 players in Hearts, and only 1 winner, your odds of losing are good: 75%, all other things being equal. So if you are going to play Hearts, you need to be willing to accept taking a loss in most of your games. The game is a good test of character, in this respect!

Further, Hearts is a team game. During any hand of the game, the player who is winning is the one with the lowest points. The "teams" are composed of loose alliances between the 3 players with the highest points at any one time. They should be collaborating to dump point cards on the person who has the least points.

By collaboration, I do not mean "table talk," the practice of blatantly discussing the card play with others. You should never do this unless everyone at the table agrees to it. Rather, I mean that you should be reading the actions taken by other players to try to get a hint about what cards they have and what they plan to do.

The team should make every effort to prevent the low-points player from shooting the moon. They should also try to protect the player with the highest points from taking on more. You don't want that player to reach 100 points while you are not the lowest-point person. If that happens, you lose!!

So if you have the Queen of Spades in your hand, don't just get rid of it at the earliest chance! It is a valuable tool that you can use to bring yourself closer to being the winner. You should think about how you can give it to the lowest point player. You want to hold onto it until is completely clear that a trick will be taken by the low point player - then drop it on that trick. It's not easy! Sometimes it's very clear who will be taking the trick, and other times you will not be sure. In those cases, it's advisable to hold onto the Queen. If it looks like you might "eat the Queen" by holding onto it, you have to weigh the pros and cons of dropping it on a trick. If the wrong player gets the Queen, will the game end with you as a loser? Nowadays, my preference in such situations is to risk taking the Queen myself and avoid ending the game as a loser.

Once I started playing Hearts as if it's a team game, in this way, I enjoyed it much more.

Example of Passing Cards from the Tutorial

There's a fun Hearts tutorial at World of Card Games. It is designed to explain the mechanics of the game. However, the simple strategy that is shown leaves something to be desired. Let's take a look.

In the screenshot below, the "Professor" is explaining the phase where you pass 3 cards to another player. He's saying "You want to avoid taking cards, so it is good to get rid of high cards.... In Hearts, Aces are high, so let's pass those": 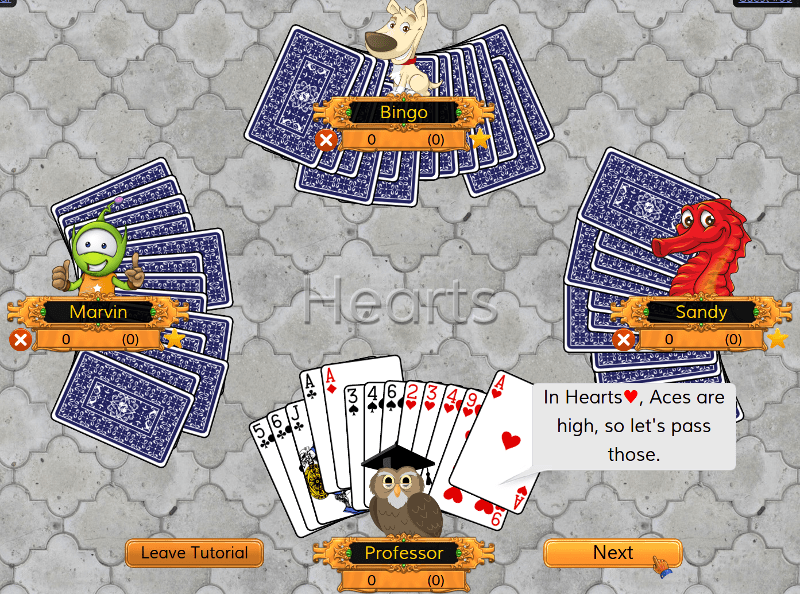 This is probably not a good idea! The Professor winds up passing his 3 aces to Marvin. In doing so, he may have given Marvin the tools to shoot the moon. This can happen if Marvin has a couple of high Hearts cards or maybe no Hearts cards at all, but a few other high cards.

If I had this hand, I would probably hold onto all of the Hearts cards. I have plenty of low Hearts to avoid taking a trick filled with Hearts, and I could try to dole them out onto anyone I chose by creating a void in another suit as quickly as possible.

Instead, I'd probably pass the Ace of Diamonds to try to create a void in diamonds. The Ace of Clubs is probably safe to keep - I'd likely be able to play it on the first trick. Instead I'd get rid of middle cards like the Jack and 6 of clubs.

Another option would be to hold onto all the Aces and attempt to shoot the moon. But with all those low Hearts and Spades cards, it's pretty risky.

Example Strategy for Playing a Card from the Tutorial 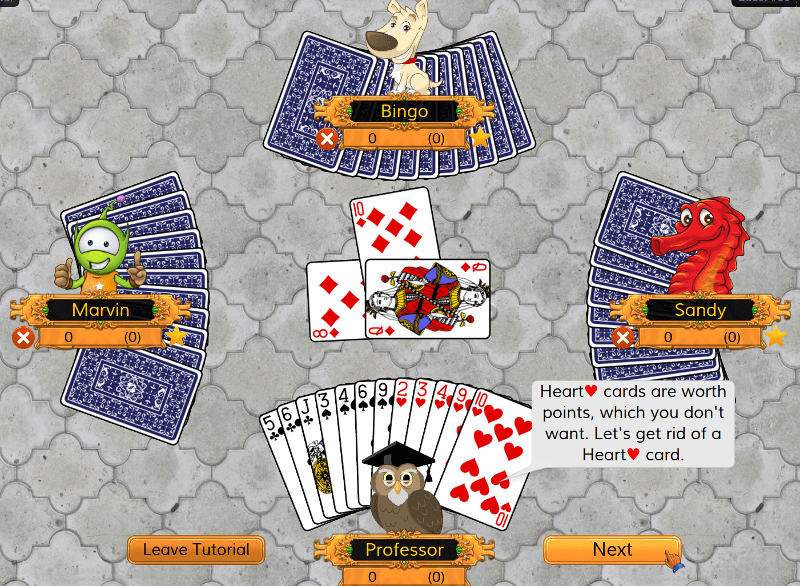 Now, the second trick is being played. The Professor has no Diamonds, so he is planning to break Hearts by playing the 10 of Hearts card on the trick. He knows for sure it will be taken by Sandy. It looks as if his strategy is to systematically get rid of his point cards as soon as possible.

Given that he has earlier given his Aces to Marvin, this is probably a good idea. It's very likely that Marvin will take some point cards with one of those Aces.

However, in general, you probably don't want to get rid of all your high Hearts cards until you are sure that no one can shoot the moon. For example, if you were holding the Ace of Hearts, you might not want to get rid of it, yet. Instead, you could play your next highest card, and hold onto the Ace just in case you needed to use it to prevent an attempt to shoot at the moon. If you had to do this, you'd be playing the role of "sheriff". This and other Hearts strategies are explained on Mark Whitley's great Hearts Tips pages.