Rules of Hearts at World of Card Games

The rules described on this page are the "Standard Rules" for playing the card game Hearts at World of Card Games. [Edit: In February of 2018, a new Option was added to play the game according to "Tournament Rules". Click that link to read about those rules].

The goal of the game is to win by collecting the fewest point cards. Each hearts card is worth one point. The Queen of Spades is special in being worth 13 points, so you really want to avoid collecting it.

The cards are shuffled, and the computer deals everyone a random set of 13 cards.

The player who has the 2 of clubs must start by placing it face-up in the middle of the four players. The person to their left must "follow suit" by playing any one of their club cards. If they do not have a club card, they can play any card except for a point card (that is, they cannot play a hearts card or the Queen of Spades). More details about this are in the next section.

Then the next person to the left follows suit, and finally the last person does. This sequence of 4 cards being played is called a "trick".

The person who takes the trick leads the next trick by placing any card from their hand, except a point card, in the middle. You cannot lead with a point card until hearts are broken, as discussed in a following section.

Rule 1: No Point Cards on the First Trick

Above, I said that each player must "follow suit" on the first trick by playing a club card. But what if the second player does not have a club card? Then they can play any card that is not a point card. That means they cannot play the Queen of Spades, nor can they play a hearts card on the first trick (unless they have no choice at all because they don't hold any non-point cards in their hand - that would be most unusual!). They are allowed to play a diamond card, or a spades card, as long as it is not the Queen of Spades. This is only true for the first trick! If you cannot follow suit after the first trick has been played, then you can play any card from your hand that you want.

For example, suppose the first trick played out like this: 2♣, 4♣, 8♣, 1♦. The last person to play a card didn't have any clubs, so they dumped their diamond Ace on the trick. The person who played 8♣ must take the trick, because it is the highest ranking card of the lead card's suit. The lead card is the card which was played first in that trick, the 2♣ card. So even though the 1♦ has a higher rank, that is irrelevant, because it is not a club.

There is an exception to the rule about not playing point cards on the first trick. In the distant past, some people decided that it would be fun to be able to immediately play a hearts card on that first trick if a person had no clubs. Since some people like to play the game that way, World of Card Games allows it, but you must create your Hearts table using the "Allow First Turn Hearts" option: 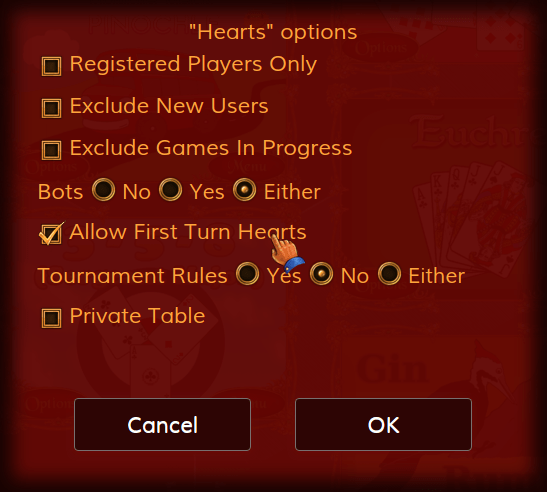 After the first trick, the game continues in the same manner. The person who took the previous trick leads by playing the first card.

Let's suppose that the person who is leading the second trick places a diamond card face up in the middle of the table. The person to their left must also play a diamond card. Like before, there's an exception: if they do not have a diamond card, then they can discard any card in their hand. Since the first trick is over, they can play any point card on the trick. If they do this, it is called "breaking hearts", and sometimes people say that the person has "painted the trick". They can play the Queen of Spades if they have it, or any hearts card. They don't have to play a point card, however - they can discard a spade or club, any card is legal.

Rule 2: Cannot Lead Hearts Until Hearts Have Been Broken

The first trick was described in a section above. The person who took the first trick has to lead the second trick. They are allowed to play any card in their hand except for a point card. This is rule #2: you cannot lead with a point card until "hearts have been broken". Suppose you are leading the second trick, and no one has yet taken a point card. You have some cards of each suit. You can lead with a club, a diamond, or a spade, but not a hearts card.

This rule is true for all tricks, not just the first and second ones. No one can lead with a hearts card until hearts are broken.

Most people play Hearts with the "Shoot the Moon" rule. A player who takes all the point cards during a hand has "shot the moon" - i.e. they have taken all the hearts cards as well as the Queen of Spades by the time all cards have been played. The result is that the other players are given a penalty of 26 points (in some cases, when it is beneficial, the player who shoots the moon subtracts 26 points from their own score). It is a matter of strategy to prevent other players from shooting the moon. In some cases, it may be strategically advantageous to let someone shoot the moon, or to help them to do so!

Shooting the Sun is similar to shooting the moon. However, it's even more unusual. If you take all the cards during the hand, point cards and non-point cards, then you've "shot the sun". The other players are penalized with 39 points [Edit: prior to February 2018, the sun penalty was 52 points].

Not everyone plays using this rule. It's more difficult than shooting the moon, and probably relies more on getting a particularly lucky hand.

The game continues as described above, until no one is left with cards in their hands. The total points collected by each player are recorded (1 point for each hearts card, and 13 for the Queen of Spades).

Then, the cards are combined into a single deck and reshuffled. The process is repeated as for the first hand of cards.

The game ends when at least one player has a score of 100 points or higher. The game is won by the person who has the lowest score. For example, if the players' scores are 55, 99, 101, and 110 after the last hand, then the player with 55 points is the winner.