There is a Hearts tutorial for beginners at World of Card Games. It is geared mostly towards introducing the rules, and describes a very rudimentary strategy.

In a different post, I discussed a more advanced approach to passing cards. In that example, I critiqued the strategy shown in the tutorial. I pointed out that passing all of your Aces can lead to an opponent shooting the moon!

On this page, I have an example where one player has a pretty low score, and the rest of us have higher scores. If we are playing "low man Hearts", then we all are motivated to give points to the low man. We should not try to put points on each other while the low man sits back and laughs! We should act as a temporary team of three to load up the low man with points. The easiest way to do this is to try to place the Queen of Spades, worth 13 points, onto a trick that is taken by the low man.

In the screenshot below, the game has just started. HitchBOT (west) is the low man, with only 52 points. Deckard (north) is left of the low man. If he leads a trick, it will end with the low man. That means he is in a position to "bleed Spades" and possibly force the Queen onto the low man.

However, as a general rule, if a trick is led by the player who is to the left of the low man, that player should not lead spades. Why? Because it allows the low man to discard any dangerous high spades - the King or Ace - without repercussions. 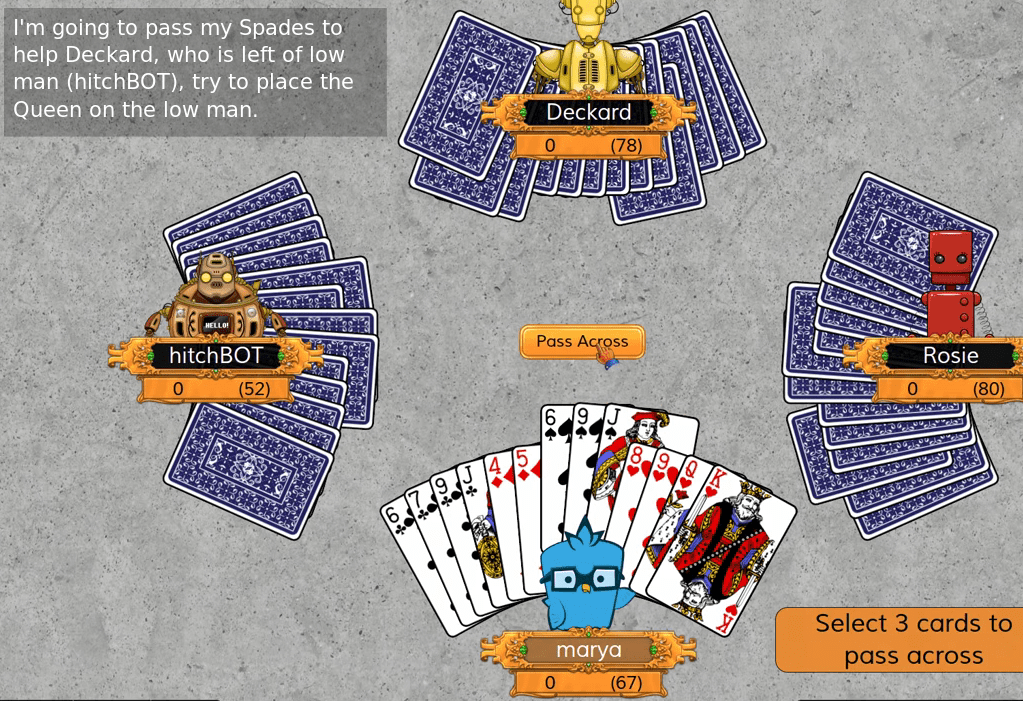 As you see in the screenshot above, I am going to take a risk, and pass all of my Spades into Deckard's hand. My hope is that he will be able to flush out the Queen onto the low man. If he has the Queen, I hope he has enough supporting spades to feel safe keeping it for any number of tricks, until he can place it with assurance on a trick being taken by hitchBOT.

It's a risk for me since I'll be void in Spades. If I take the lead and play a club or diamond, and the person holding the Queen is void in that suit, they may put the Queen on that trick. Deckard and Rosie should be motivated to avoid giving me the Queen, since it doesn't give points to the low man, but you cannot always trust that people will resist doing this! Newer Hearts players can be quick to drop the Queen no matter where it lands, just to get it out of their hands.

Watch the video below to see what happened during the trick.

As you can see, the low man did wind up taking the Queen of Spades, so my strategy worked! When spades were led for the 3rd time, Deckard knew that hitchBOT had the Queen, because he himself did not have it, and Rosie and I were void in spades. He just kept playing spades to force hitchBOT to eat the Queen.

But it turns out that my strategy is not that great, actually! I did put myself at a lot of risk by passing all my spades away. People usually do not pass spades, so it's unlikely I'd get any in the pass. And I did not.

I've asked a Hearts expert (who goes by the name of "Dumpopottomis" at World of Card Games) about my strategy here. He told me that indeed, passing away all my spades was probably excessively risky. It would have been better to pass one at most. He suggested I might pass my diamonds too, hoping to be void in diamonds.

I did try running through this hand as a simulation in various ways. It turned out that I was more vulnerable than I realized. The low man, hitchBOT, was void in clubs after the first trick! Also, since he had the Queen, he would immediately place it on any club trick. So in many scenarios, I would wind up taking the Queen myself as soon as the next club was led. I had lots of clubs! In this scenario, I would have been better off passing more clubs away, and fewer spades.

The reason that I'm posting this video is to give you some food for thought about your passing strategy. The player who is left of the low man is in a good position to place the Queen of Spades on a trick that will be taken by the low man. This is especially true if this player is last. Of course, they need to possess the Queen to be able to do that.

The player who is right of the low man (me, in this case) can be in a good position to bleed spades through the low man. What does this mean? If I lead a trick with a low spade, then if low man has the King or Ace of spades but no Queen, he is going to be afraid to play them unless he has no choice. He will play a low spade, and will be stuck with his high spades. This makes it more likely that bleeding spades will cause him to take the Queen in a later trick.

Of course, all these tips should be more or less reversed if you are the low man. Bleeding spades works great to force the Queen into anyone's hand but yours. Even so, if you are low man, it is still helpful to try to put points on the second lowest scoring player. This keeps everyone a good distance away from you in points... making it harder for someone to come from behind and grab victory away from you. So you will still want to put some thought into driving points onto the player who is closest to your score.

Caveat: if you think that the other players are not playing as a team, then your choices for strategy will be more restricted. Some people play Hearts to avoid coming in last, rather than to come in first. You may still want to aim for low man, but cannot count on support from the other players. This requires extra care.