Bidding as a Signal

If you do not know anything about meld and trump in Pinochle, you will want to review that information before continuing here.

In Double Deck Pinochle, there is a round of bidding immediately after the cards are dealt. As a beginner, your first task is to look at your cards and decide what bid to make. This page is designed to help with that.

Caveat to Spades players: Your bid in Double Deck Pinochle is not the number of tricks that you think you can take.

In Double Deck Pinochle, your bid is used to convey a signal to your partner. It can either be used to tell them about your meld, or about your desire to "make trump" (this is a jargon term - it means you want to choose the trump suit).

A "captaincy bid", also called a take bid, is a bid that tells your partner that you want to choose the trump suit. The simplest such bid is an opening bid of 50; this is the minimum bid you can make without passing altogether. A bid of 50 means "I want to make trump, let me know if you have any meld." (There is an exception - the "save" bid - discussed elsewhere.)

A bid that adds 1 to the previous bid is also usually a captaincy bid. For example, if the previous player bid 55, and you bid 56, then you are saying "I want to make trump."

If your partner has made a captaincy bid before you got to make your own bid, they may still find it useful to know your meld in follow-up bids. It is useful to provide a meld bid to your partner even before they have made a bid.

Your partner may think that they have a good trump suit, but if they are poor in meld, they may be afraid to try to win the bid. The rules of Double Deck Pinochle require that your team have at least 20 meld in order to make trump. If you or your teammate wins the bid, but have 19 meld or less, you will immediately lose 50 points! So giving your partner information about your hand is usually helpful. If on your first bidding opportunity you pass, this also conveys a certain message to your partner: "I have less than 20 meld".

Let's look at an example. You have been dealt a set of cards, and as a beginner you are not sure what meld you have in your hand, so you click the "show meld" button. You have 22 meld. The meld will have been computed without a trump suit, because trump has not been chosen.

You are in "first seat". This is another jargon term. It means you are the person left of the dealer, and hence the first person to bid. What should you bid?

Let's assume that you want to "tell" your partner that you have 20 meld. The way to do this is to add 2 to the current bid. But there is no current bid, so what does this mean? The default minimum bid is 50. So add 2 to 50, and give a "meld bid" of 52. Any player who knows about meld bids will understand that your hand contains about 20 meld. Note: that includes your opponents! You are giving your partner information, but at the cost of revealing information to your opponents as well.

You may have noticed that Mr Pinochle has a "run" in hearts in the screenshot above. He has a card of each rank in that suit: A-10-K-Q-J. If hearts were the trump suit, he would get additional meld due to the run. However, such additional meld should never be added to your meld bid. Only meld that is independent of a trump suit should be used for making a meld bid.

Are you confused about why you added 2 to the current bid above? It's because you had 20 meld. The rule for giving a meld bid is:

Here is an example where you are "second seat" (second to bid). You have 52 meld - that's a lot of meld! 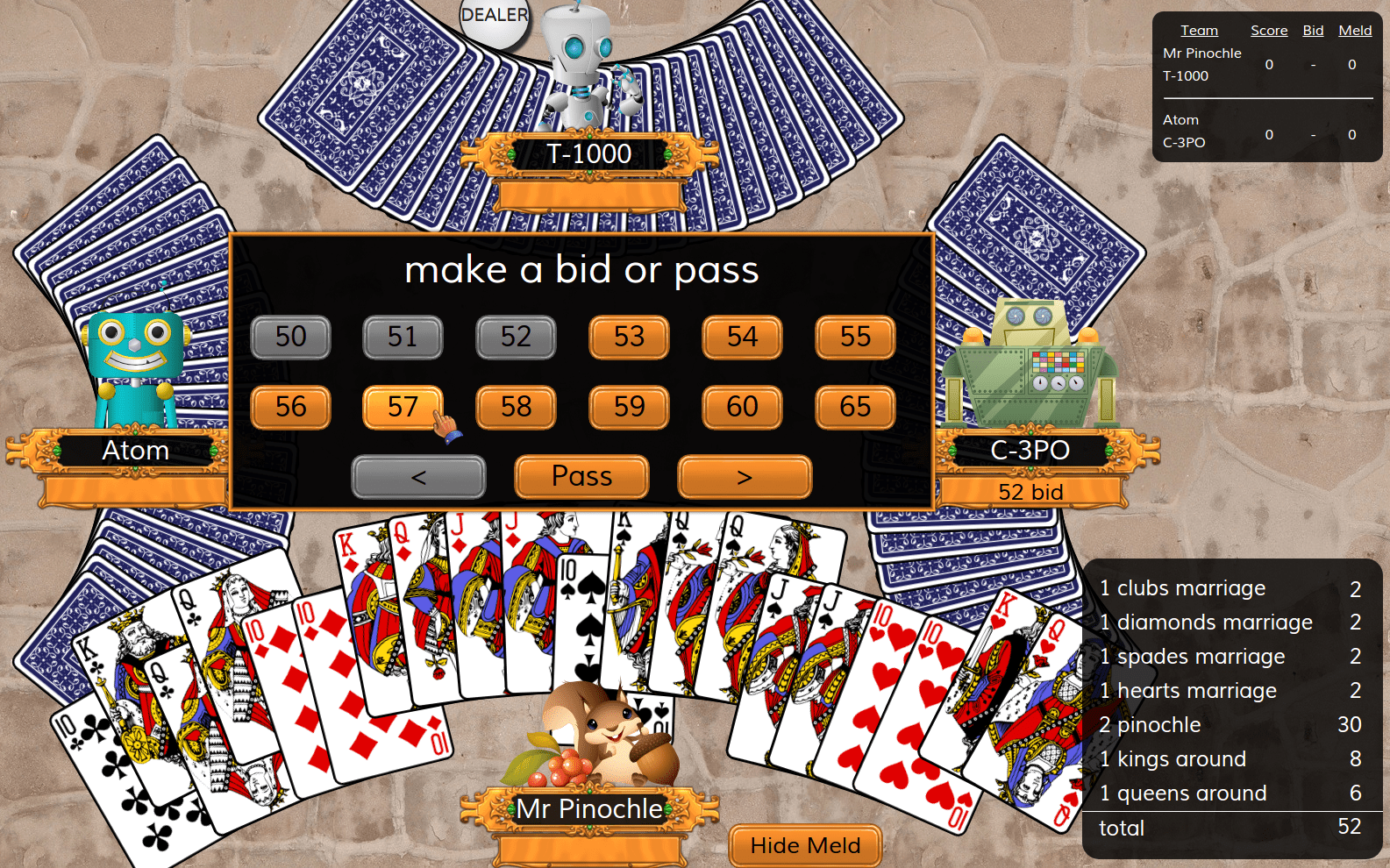 If your right-hand opponent (C-3PO in the screenshot) had passed, your meld bid would be 55. However, that player bid 52 - and in doing so, revealed that he has about 20 meld. If you want to give a meld bid, you will have to add 5 (52/10) to the previous bid. That means your bid should be 57. Sometimes, in discussions, people will say "your meld bid is +5" in this case. But you should never say this out loud at a Pinochle table! Signalling is never done verbally, with Pinochle.

When is it Impossible to Meld Bid?

In the screenshot below, Mr Pinochle should not give a meld bid. There are a couple of reasons. Can you spot them? 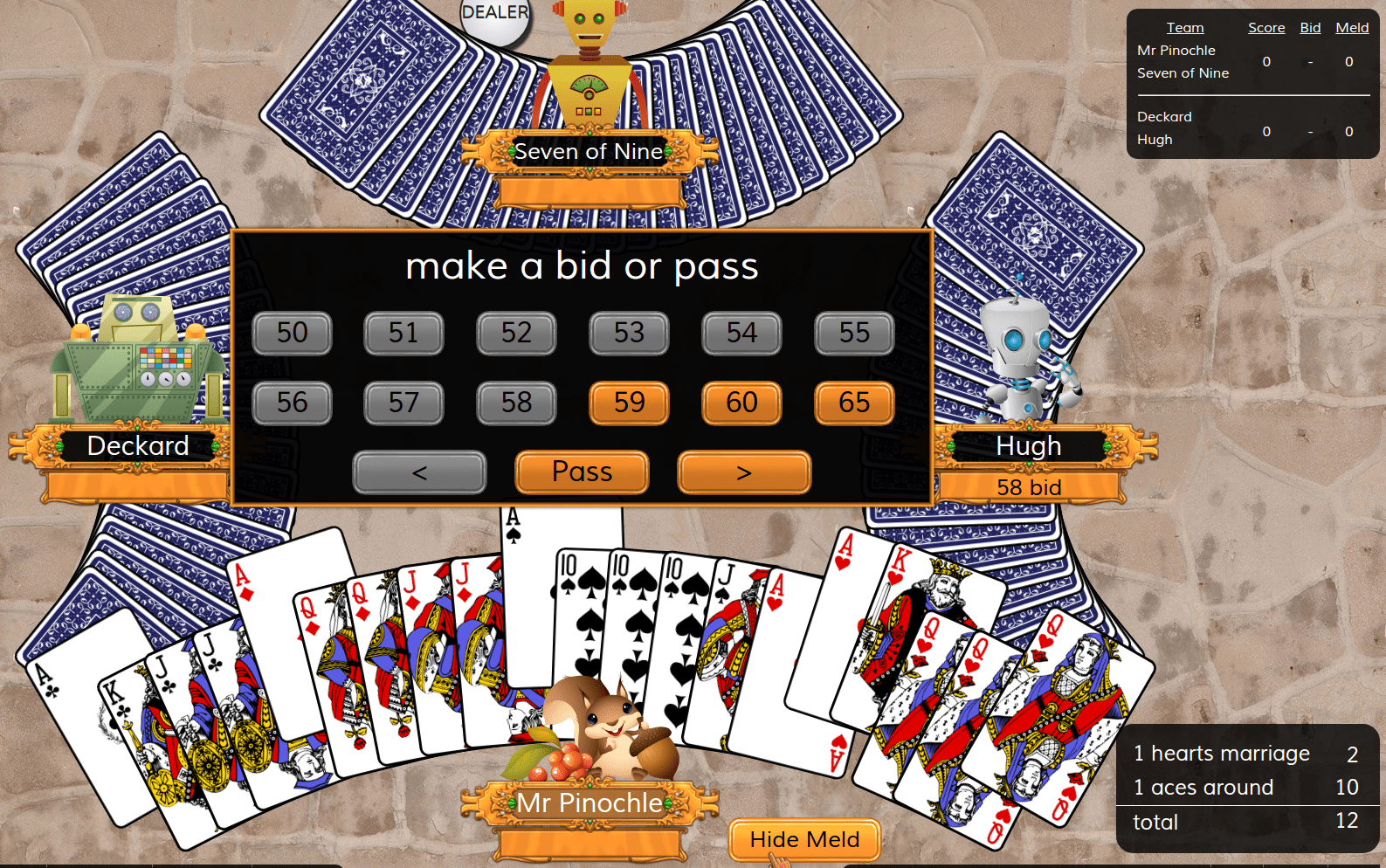 You can read more discussions about bidding here: